Fail Fast, Fail Often – Learning to Love your Mistakes and How to Learn a Language

What are we actually talking about when we talk about how to learn a language?

We talk about how to learn a  language a lot. It’s worth stepping back and asking what exactly we mean by “learning”: what is learning and how can we get better at it to achieve language goals faster.

Learning is making an error, being corrected and then making the error less often.

Fine – some more details! We’ve got work to do to make the point that you need to make more mistakes. More than that, you need to start loving your mistakes.

Lets look at the process of learning in more detail.

Making a Mistake is the First Step to Learning

First we hear or read something we want to be able to use. This might be a simple nǐhǎo or something more complicated like the lyrics to a song.

We try to repeat whatever we just heard. If we get it right, perfect. This means that there’s nothing to learn. You already know it!

Chances are mess up something. Maybe the pronunciation or intonation – whatever it is our repetition sounds somehow off. We’ve made a mistake – oh oh. Mistakes are a bad thing right? No.

This is the critical juncture. If we want to learn we need to recognize a mistake was made and get a correction.

Who is best qualified to give feedback on our foreign language skill? I’ll tell you who is not qualified – you!

For one, what we hear in our own head when talking and what others hear is often not the same. Record yourself talking and listen back if you don’t believe me – very likely you won’t recognize the person talking.

I know zero about petunias. Do you see me running around judging flower shows? Nope. Well, maybe that once, but that was a disaster I hope we can all forget. Why would I be qualified to judge my Korean pronunciation when I don’t speak Korean well? Same deal with the petunias. We need someone who knows more than us to give feedback.

When I make a mistake I want to get corrections from someone who knows what they are talking about. If working on Chinese pronunciation I want a Chinese person, preferably a teacher who knows about these kind of things, to tell me what I’m getting wrong.

So I hear something. I try to say it. I mess it up completely. A native speaker tells me what I’ve got wrong.

That is language learning. Again, this may seem simplistic to you. The problem is that a lot of language learners know this stuff but fail entirely to change their learning process as a result!

Instead we tend to spend the majority of time doing activities that block or misdirect the learning process.

The tendency is to lock ourselves away and do textbook exercises, grind flashcards or play some form of game-like language learning app. Or perhaps we attend group classes and repeat dialogues among a herd of people, our voices conveniently quiet so the teacher can’t hear.

What’s wrong with these activities? We are denying ourselves the chance to receive feedback. Or, when there is feedback, as in the language learning games, it’s not the right feedback.

We are denying feedback by not being honest about our mistakes. If we are self grading (as we tend to do a lot in self-study) or perhaps receiving no correction at all (as in group settings) then we can conveniently avoid the process of making a mistake, being called out on it and being corrected.

Why? Well, a large part is because humans don’t like to be wrong. We don’t want to make mistakes, especially in front of other people. We feel exposed and naked when we mess up.

I remember “learning” GCSE French back in school and dreading the possibility of being called on to read a sentence out loud in front of the class. Of course these on-the-spot checks were among the most useful parts of GCSE French classes. There’s no way to hide a lack of knowledge in such a situation and the subsequent corrections were personalized to my mistakes. Instead of fearing these situations I should have embraced it. My French would certainly be better had I done so!

Why are we Afraid of Making Mistakes?

This fear comes from equating our mistakes with our sense of self: my failures are because I’m a failure. Nonsense.

Of course the first time you speak Chinese or any new language you’ll be rubbish. There’s no way around that, even if you are Chinese. In fact babies are even more rubbish than adults – all that drooling and sicking up.

The first time you try anything you’ll be crap at it. That’s just a fact I’m afraid. But by trying, failing, receiving correction and making the mistake less often you get better. You learn.

If you met only success you – by definition – cannot learn. Chances are the reason you are continuously successful is because you are only testing what you already know. That’s the only way to be continuously right and not mistakes.

This is the reason why we don’t take English language class (or whatever your native tongue is). I bet I could ace standardized tests of English proficiency (or at least hope so!) but doing so would only be to stroke my ego and would teach me precisely nothing.

Less extreme examples include going over vocab you already know well enough or having the same conversation in your foreign language again and again for years. Sure you’ll be successful. But at this point you aren’t actually learning, you are just spinning your wheels and not moving forward.

Failing is the only way to not be a Failure

Paradoxically you need to fail and make a lot of mistakes in order to not fail at the larger task of learning a language. On the flip side if you are continuously successful it means you are not learning and that your overall project will not be successful.

So, make mistakes to succeed. If you are constantly right it means you aren’t learning and your project won’t progress.

Easy; make more mistakes. Make as many different mistakes as you humanly can each and every day, get feedback and learn.

In the start-up community there exists a popular idea about running “lean”. The core idea is about making mistakes as fast as possible, as early as possible. In fact there’s an enviably good slogan for this: fail fast, fail often.

Large, multinational corporations (insert your favourite/worst American automobile or pharmaceutical company here) are not lean. They spend hundreds of millions on very secret projects that take years if not decades to come to fruition.All of this money and manpower for one product launch.

When the veil is lifted and the smoke from the fireworks wafted away they are shocked to find that the customer just isn’t interested. The customer “fails” to buy the product, despite the millions spent on successful market research saying that this is a must-have product. Instead the customers’ reaction is a giant “meh”.

These launches can be catastrophically terrible – sometimes large enough failures to bring the whole company down. 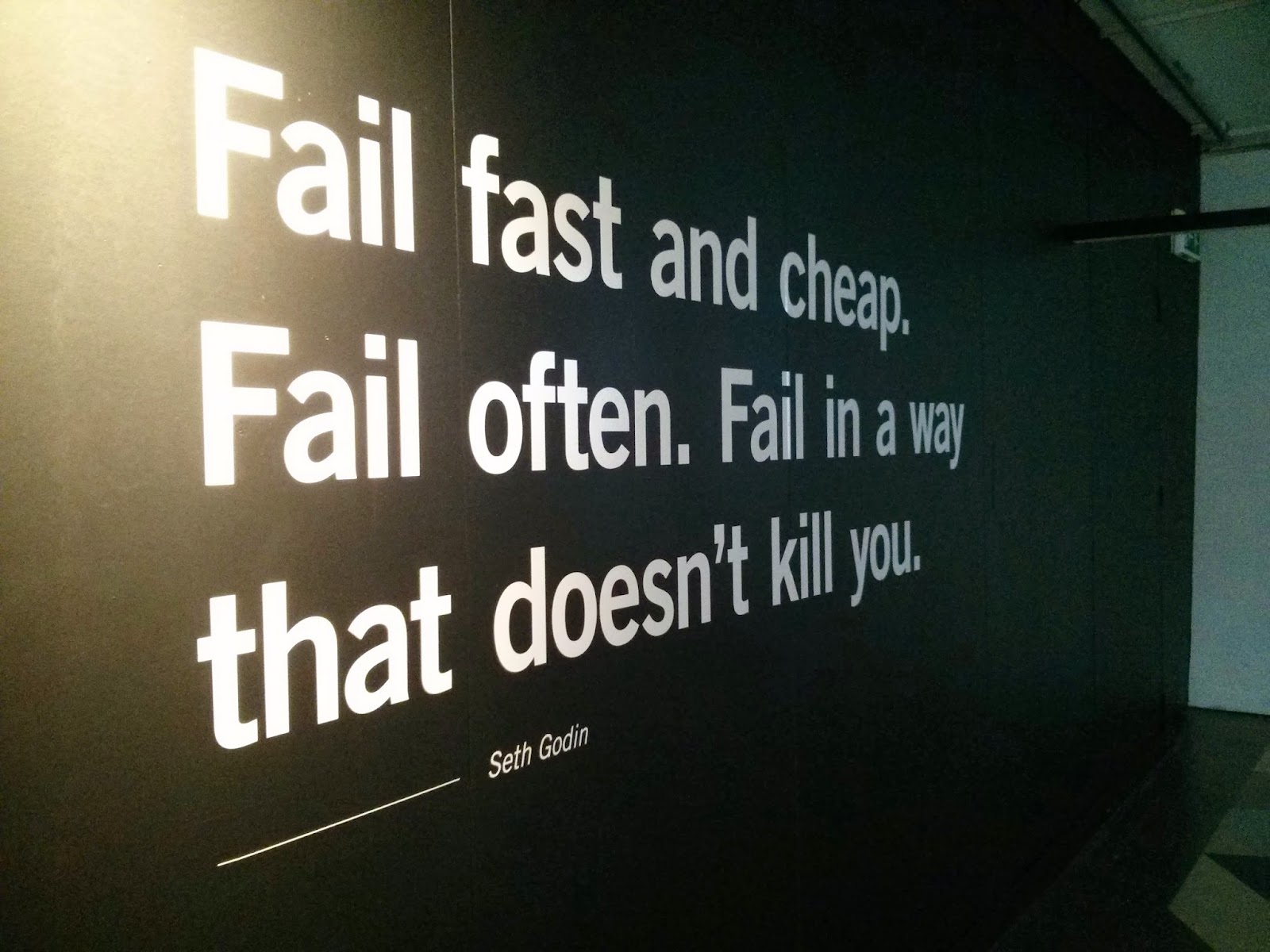 Fail in a way that doesn’t kill you – Seth Godin (img:sidewalksafari.com/)

The results are messy, mistakes are made, perhaps no-one wants it. But these mistakes are small; not large enough to kill the company. The company can pivot and make changes based on this customer feedback. Each mistake makes the company stronger.

Instead of storing up all their mistakes for one ginormously expensive FAIL, lean companies make small affordable mistakes every single day, get feedback and change their offering until it’s a success.

The sum of these small affordable mistakes is a big success.

Or, How I Stopped Worrying and Learned to Love Making Mistakes

If learning is running through this loop we want to expose ourselves to as many rotations as possible per day. This means changing how we think about making mistakes. Learn to embrace mistakes and love them as the mechanism through which we learn. Laugh at your mistakes and enjoy them for what their learning power instead of fearing them.

How do we practically do this on a day to day basis?

One idea is to keep a journal of your day’s language mistakes. This doubles up as a learning journal because mistakes are the beginning of learning. Get a notepad or open up an Evernote document and jot down what mistakes you make throughout the day as well as the correction you received. The act of writing these down will automatically make you less likely to repeat the mistakes because of the extra attention you’ve paid to them.

Laugh at your mistakes. Tell people about them. Go further and tell our community about it using #languagegoof. One mistakes I used to make in Chinese is mixing up 感性 and 性感 (basically flipping the characters and creating two different words). Unfortunately one means “perception” and the other “sexy”. Good times! What are your worst (best!) mistakes?

What about how to get native correction? Here are some specific resources for getting native feedback which is the only way to make sure that you are actually learning.

– A native speaker. No-brainer here. Access to a native speaker or a native speaking teacher is the best way to get feedback. If you don’t have a native speaker to follow you around 24/7 (for shame!) or in even in your area then iTalki.com is a great place to find a teacher, tutor or language partner. Nowadays we have countless apps and websites to connect us to foreign language speakers – there’s really no excuse.

Heads up – the above iTalki link is a referral which means I get free language lessons and you get $10 off a teacher, if you decide you want a paid rather than free teacher. I wouldn’t suggest iTalki if I didn’t use it myself and me getting more lessons means I can provide more value to other learners here but if you are uncomfortable with referral links please use this non-referral link to iTalki which has no connection to me. Thanks!

–WaiChinese (specifically for Mandarin Chinese speaking). This is the closest to having a native speaker follow you everywhere and be at your beck and call. You little tyrant you! This app gives you contact to a professional Chinese teacher who will provide feedback on your tones and pronunciation on the go. Cool stuff.

– Lang-8. For practicing writing and receiving native feedback Lang-8 is hard to beat. You write in your target language and native speakers provide detailed corrections. Make sure you help them with the languages they are learning!

– Hi-Native. Also from the guys at Lang-8. Hi-Native is a phone app that lets you ask native speakers questions about their language. A good way to get fast answers but less useful as a day-in-day-out feedback source.

Still finding it hard to just get out there and start talking to Chinese speakers? Check out Benny Lewis’ free email course the Conversation Countdown.

If you like Benny’s style then you may also want to check out his Chinese specific work Chinese is Easy, which goes into more detail with Chinese specifically. That one isn’t free but it’s worth a look for sure.