Rather than follow one method slavishly it’s better to pick and choose the pieces that work and discard the rest.

The three that I want to talk about are:

By logically moving from one character to the next, Heisig makes it easier to accumulate a large number of characters in an efficient manner.

He also encourages the use of mnemonics (a fancy Greek word for memory devices) so that the learner can remember characters by telling themselves short stories that contain the components of the character. It’s a wonderful piece of work and well worth having a look at.

Here’s an Amazon link (non-affiliate) to the Simplified version of the book. There’s also a Traditional version. Click the book cover image to preview the inside and you can see the format of the book. Each character is presented in a frame. By the end of the two volumes Heisig covers 3000 such characters – quite a feat! Here’s Heisig’s explanation of a single character frame:

There are a couple of problems with Heisig’s system which make it unsuitable for our goals.

One is that Heisig chose not to include the pinyin pronunciation in the main body of the book (they are relegated to the appendix).There’s debate over whether this was the correct thing to do  and really this depends on the learner’s objectives.

From the point of view of communication though this seems like a flawed approach. I have known a number of people who had successfully mastered Heisig’s books but didn’t necessarily know how to actually say the words in Chinese. They could point at a restaurant sign and say “Aha! That says Sichaun spicy chicken restaurant” but would be at a loss to actually read the characters in Chinese!

Instead they could recognize a huge number of characters and know the English meaning. They had indeed mastered a large portion of the Chinese characters but I would argue their objective of learning the English keywords was the wrong objective. Only with supplemental study would they be able to hook the Chinese pronunciations onto the characters they had learned.

Additionally, Heisig’s book focuses on characters only. Learning the characters is a core part of learning Chinese words (which are generally  2 characters – not always but the vast majority). But if the learner does not move to Chinese words their actual communicative ability is stunted.
The commonly used units of meaning in Chinese are generally 2 characters words with the exception of grammatical particles and pronouns (and classical Chinese which is far more single character based). Therefore by focusing on individual characters and not 2 character words Heisig’s usage is limited.
Instead of charging ahead and learning thousands of characters the student would be in a better position had they learned, say, 200 characters and then 500 words composed by combinations of those 200 characters. A relatively small number of characters can be mixed and matched into a vast number of words in Chinese and to reach a basic communicative ability it is not necessary to first learn 3000 individual characters. Thankfully a lot less are required to start using the language!
We’ll look at the difference between characters and words in later articles so don’t worry if this distinction is not yet clear. There’s a lot of overlap in Chinese so this can be confusing.
Finally, Heisig’s learning order is very static. If you are using it alongside other materials (for instance a textbook or words you learned whilst talking with a language partner) there will be no overlap.
You will find yourself studying from Heisig and then from the textbook – the characters and words will only overlap by pure chance during a particular study session. There’s no way to integrate the new words you’ve learned during study into Heisig’s list. Instead Heisig will be a parallel study.
Heisig’s method is a huge step up on rote learning by writing out the characters until they are learned. But because of the problems outlined above it’s not a very efficient way to gain a working knowledge of Chinese characters.
The useful parts include the way Heisig decomposes characters into their constituent parts and the use of memory devices to hook stories to the characters. We’ll be using both of these aspects in our method and jettisoning the less useful aspects.

A much more dynamic method is found in using SRS systems. SRS stands for Spaced Repetition System. In short a SRS system allows you to input Chinese characters, words or even sentences and and then periodically test yourself. Think of paper flashcards but automated by a computer  algorithm that knows when you should review the cards.

The SRS system will ask you for the meaning of a character or how to write it. If you get the question correct you tell the SRS that you were right. The SRS will then show you this particular question less often than questions that you get wrong.
The SRS will never stop asking you the meaning of vocabulary – it just increases the time until it is next asked. So even something like 你好 might show up in the system a year down the line.
I like to think of SRS systems as a secondary memory/brain. All the Chinese words I have ever learned are in my SRS system.
I periodically use the SRS system to test whether those words are also in my real brain. If I get the questions right the SRS will show me those words less often – if I get the question wrong the SRS will keep asking me to make sure that the word is properly remembered.
Examples of SRS systems include Anki and Skritter. The popular (and amazing) Chinese dictionary app Pleco also has a SRS add-on available. In the Sensible Chinese Character Course I talk a lot about how to get Pleco’s SRS up and running properly.

The problem with SRS is that it’s a tool rather than a method. Regardless a lot of people use SRS as their only method of learning characters, or even allow SRS to take up all of their Chinese study time, at the expense of actually using their Chinese to talk to real people. There are a number of problems with this.

The primary issue is that the learner is becoming very good at SRS and not necessarily good at Chinese! Being able to do SRS and being about to communicate in Chinese overlaps less than is often thought. Unfortunately doing SRS feels very rewarding (like a computer game) and gives the impression that a lot have been learned.

SRS also suffers from the “rubbish in, rubbish out” problem. If you are not putting the right material into the SRS then you are just memorizing the wrong stuff very efficiently!

There are also user-based issues that arise with SRS. Upon failing to recognize a character a lot of people will just hit X to indicate they don’t now the character but then fail to do anything about this.
There’s a belief that if the forgotten character is in the SRS then eventually it’ll get learned. But without active study of a forgotten character this is not true. Instead your SRS system will just get clogged up with lots of unknown characters and words. SRS is often used as a substitute to actually studying characters with the hope that you’ll just absorb Chinese through osmosis.

SRS is a very powerful tool but that’s all it is. A tool, not a method in and of itself. SRS is not learning: it’s a tool to support memorization.

Used properly though SRS is going to help us a lot. It will play a large part in the method to be described.

Another new method that is being heavily publicized at the moment is the Shao Lan’s Chineasy method. Shao Lan and her team are doing a great job at building public awareness of the Chinese language and making it more accessible.

Shao Lan’s TED talk is well worth watching. The course material and general presentation of Chineasy is immaculate. The design (seen below) is gorgeous and it’s understandable why these books are so popular. 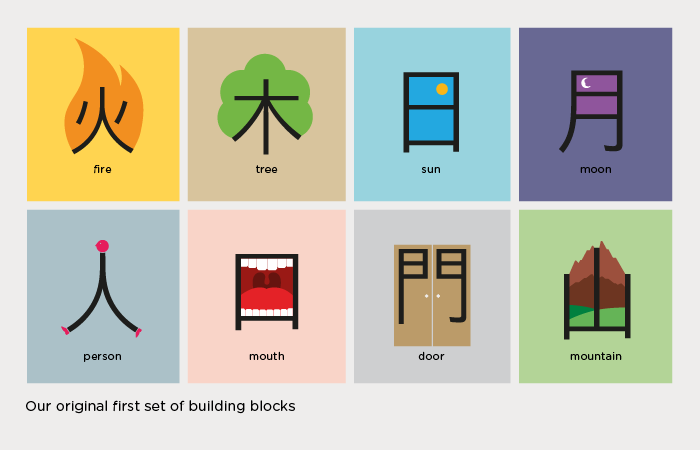 The main problem is that the methodology is focused mainly on “ideographic” characters – namely the characters that look like stuff in the real world.

When the Chinese written language first began the basic characters were pictorial representations of real things – the sun, a man, a tree etc.

Modern versions of these characters still (with some imagination) look like these objects. The problem is that these ideographic characters make up a relatively small part of the Chinese language (less than 10%).

They are excellent for introducing Chinese to learners and for explaining Chinese to non-Chinese speakers but their utility runs out very quickly. There are only so man “little guy with a hat” characters you can remember because they all blur into one another.

The ideographic characters are not used as soon as anything abstract needs to be represented. This is the reason why Chinese characters had to move away from being ideographic. Representing a tree (木) is easy.

Representing a simple abstract like “to rest” (休）is relatively easy – 亻(man) + 木 (tree) looks like a man resting against a tree. But when asked to draw a picture of “modesty” (谦虚) it becomes a lot more difficult. Instead Chinese has a far more ingenuous way to represent these concepts – we’ll talk about this later.

Definitely check out Chineasy for it’s coverage of the early ideographic characters. If nothing else the beautiful presentation will get you excited about learning Chinese. Just don’t expect all the characters to follow the pattern of looking like the thing it represents. Unfortunately some of the marketing surrounding Chineasy does suggest that this is the method to easily learn Chinese characters. This might well set false expectations about the Chinese language and cause dismay when the characters simply stop looking like what they represent.

In fact the actual way that Chinese characters are composed is much more logical and systematic and does not rely on visual representation. Once you realize how the language is constructed of small pieces that are easily understandable even complicated looking characters representing abstract concepts like modesty (谦虚) can be broken down into smaller “pieces” that are easily understandable. This will be a very important part of our system and will allow us to get a handle on the 90% of the language that isn’t “picture based”.

The diagram below is an outline of the entire Sensible Chinese Character Learning System.

When we first start to learn Chinese characters everything seems so random, so unique.

In truth however Chinese characters are extremely logical. Once you know how they are constructed and the rules surrounding their construction you can start to recognize patterns and learn characters much faster.

The first half of the course therefore focuses on understanding the how of characters. What types exist, how are they structured, what “pieces” are they made up of etc.

After that I look at how to use this knowledge to:

I personally used this system to learn up to 100 characters per day. It takes some time and preparation to reach this speed but it’s certainly doable.

Here is a video introduction to the system :

Or you can directly enroll for the course here: Sensible Chinese Character Course

Alternatively you can access a complete (~1 hour long) sample lesson from the course either from this page or directly via this Youtube playlist: